So, it’s nearly time for Fifth Monday Crime, sorry, First Monday Crime, on the 30th April. Our honoured guests that evening will be Robert Goddard, Cathi Unsworth, Simone Buchholz and G.J. Minett. Joe Haddow will be chairing. If you haven’t reserved your free seat, there’s still time! Just click here. In the meantime, I’ve had a chance to ask G.J. Minett a few questions ahead of next week’s panel.

Hi Graham. Firstly, can you tell me a little bit about your first two books, The Hidden Legacy and Lie in Wait?

The Hidden Legacy came from the dissertation for my MA in Creative Writing. My tutor was the novelist, Alison MacLeod, and she suggested I enter it for a national competition for opening chapters and it won it. First prize was £500 and the chance to work online for two years with an editor in London to finish the novel which presented an interesting challenge as I didn’t have a novel in mind – it had just been an academic exercise. I came up with a storyline with two timelines which come together as the novel progresses and explain Ellen’s link to the shocking events in the school playground 40 years earlier.

Lie In Wait was the result of 45 years of teaching children like Owen Hall who might as well have the words ‘natural victim’ stamped across their foreheads. He is bullied throughout his teenage years for being different, unable to strike up effective relationships with his peers and withdrawing increasingly into a world governed by numbers which he trusts. Then, 15 years later, he is drawn back into a world he thought he’d left behind and events spiral out of control.

Your latest book is Anything For Her. What’s the storyline for this novel?

Billy Orr is 27 and building a successful career, having seemingly put behind him two traumatic events from his childhood. He goes back to his hometown to visit his sister who is seriously ill and bumps into Aimi, with whom he had a short-lived and ill-fated relationship when they were teenagers and whose importance he has exaggerated in his memory. When she asks him for help in escaping from an abusive marriage, he’s always going to say yes but is Aimi the person he’s built her up to be and is he still the wide-eyed innocent he undoubtedly was?

You’ve written three standalone books. Do you think you might ever write a series?

I wouldn’t rule it out entirely but at present I find it difficult to think in terms of writing several novels about the same character. I’m often asked where do you get your ideas for a novel? I’m not often asked where I get the characters but for me the character comes first. Once I have her/him firmly established in my mind and understand where the weakness is, I then come up with a storyline that will test that weakness. I think a series would probably be more about finding a number of different situations in which I might put the main character and I’m not sure that would work so well for me.

I also worry, probably far more than I should do, about plausibility and the difficulty with writing a series, I’d imagine, is the number of times the central character can reasonably be expected to be placed in life-threatening situations and miraculously escape every time. Some authors do this extremely well but at present I’m still feeling my way into the genre.

As I said though, I wouldn’t rule it out entirely in the future, especially if the right character comes along

How did you make the move from teaching into writing?

Seamlessly – eventually. I’ve written since the age of nine and the writing has always played second fiddle to career, family, relationships, sport etc. I wrote a Tom Sharpe-type novel in my spare time when I was in my early thirties and it was picked up by Darley Anderson who was just starting out as an agent in those days. He tried to get it published for about a year but didn’t succeed, for which I’m very grateful because it wasn’t very good. That narrow miss meant I became known to friends and family as Graham who can write a bit and could probably get published if he really went for it and I draped myself in that comfort blanket for a long, long time rather than put myself to the test. I think I didn’t want to become Graham who had ideas above his station and wasn’t as good as he thought he was.

Then, when I reached 55, my wife suggested I put up or shut up and I did a part-time MA in Creative Writing which made all the difference. Now that I’ve officially retired from teaching I no longer have to juggle the writing with creating whole-school timetables and it makes for a saner existence.

What are you working on now?

I’ve just submitted the first draft of book 4 which is called The Less She Knows. The central character this time is Lucy Ward who is six months into a relationship with a celebrated author when she starts receiving messages and emails which are clearly designed to make her suspect that he is cheating on her. Having wrecked a previous relationship only three months before the wedding because of her inability to trust her partner, she’s determined not to make the same mistake again, but an unexplained death makes it difficult to ignore the messages and she finds herself in a battle to find the right balance between trust and naivety.

It’s with my editor Katherine now and I’m waiting for the first batch of suggestions from her before we embark on the editing process.

You’ve been to First Monday Crime before so you know what to expect. What are you most looking forward to and is there anything that you’re dreading?

Ever since I heard I was going to be on the panel here, I’ve been looking forward to sitting alongside my fellow panellists. Three years ago the very idea that I might be appearing at an event like this would have seemed fanciful in the extreme. To do so alongside these three is not far short of surreal. I’ve been practising the phrase well, when I was on a panel with Robert Goddard, Simone Buchholz and Cathi Unsworth and it may just get an airing from time to time.

As for dreading anything, if you are at Bonnier Zaffre and spend enough evenings with award-winning novelist Chris Whitaker, there’s not an awful lot that can shock you. In the past couple of years, I’ve been accused in print of selling drugs to children and I’ve sat in the audience here when Chris was on the panel and heard him lament the fact that his publishers are wasting their time, throwing money at old men like me when they could be investing in youth like him, so I’m not dreading anything. Forty-five years of teaching has taught me how to deal with unruly children.

Thank you for answering my questions, Graham, and I look forward to seeing you on the 30th April!

(NB to First Monday Crime Security Team – keep an eye out for Chris Whitaker – he could be trouble!)

You can buy Graham’s books here or you could wait and buy a copy on the night from Big Green Bookshop and get it signed. 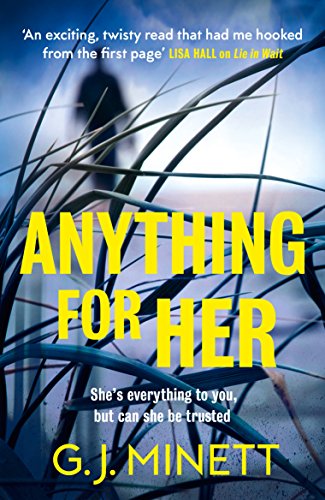 When Aimi tells him that she wants to escape her abusive husband, Billy agrees to help her fake her own death. But is she still the Aimi that Billy remembers from all those years ago?

Once Aimi disappears, Billy has to face the possibility that perhaps she had different reasons for disappearing – reasons that might be more dangerous than she’s led him to believe . . .

Sometimes trusting the one you love is the wrong thing to do. 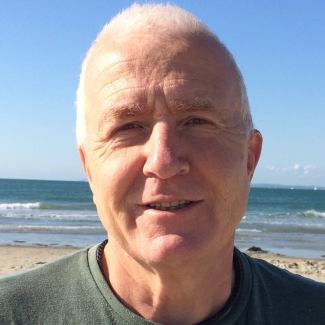 Graham Minett studied Languages at Churchill College, Cambridge before teaching for several years in Gloucestershire and West Sussex. In 2008 he completed a part-time MA in Creative Writing at the University of Chichester and subsequently won both the inaugural Segora short story competition in 2008 and the Chapter One competition in 2010. The latter consisted of the opening sections of what would eventually become The Hidden Legacy, which earned him the first of two separate two-book deals with Bonnier Zaffre.

The Hidden Legacy and Lie In Wait are both already published as eBooks and in paperback. His third novel, Anything For Her, first appeared as an eBook in November 2017 and a paperback version will follow in March 2018.

Now writing full-time, he is represented by Adam Gauntlett of the Peters, Fraser and Dunlop Agency and lives in West Sussex with his wife and children whilst nevertheless retaining close links with Cheltenham and the rest of his family.