So, I spent yesterday morning slaving over a hot oven, baking 120 cookies to take to First Monday. Was it worth it? Yes, of course it was! Not least because all the cookies were eaten.

We had a slightly shorter panel (timing wise) but just as entertaining. Erin Kelly, JA Marley, Will Carver and Mick Herron were answering questions from Kevin Wignall and the audience. 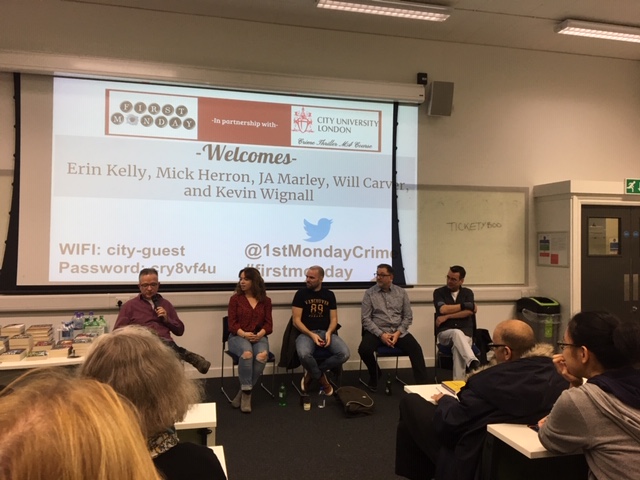 First question from Kevin – what are the authors reading?

Kevin kicked it off with A House of Ghosts by WC Ryan.

Erin has had a sneak preview at Claire McGowan’s next book, What You Did.

Will has just finished the new book from Simone Buccholz with Beton Rouge.

John (JA) Marley has also been reading A House of Ghosts as well as the latest book from James Lee Burke (I think it’s called Robicheaux: You Know My Name but I might be wrong!).

Mick has recently reread To Kill A Mockingbird and also enjoyed A Treachery of Spies by Manda Scott.

What about the authors’ road to publication?

Mick has been published for 15 years bit it’s only in the last few that he’s gained a readership with his Slough House/Jackson Lamb series. The thing that’s really helped him is that libraries have stocked his books. His publisher actually dropped him after Slow Horses but an American company continued to publish him. He was ‘rediscovered’ when his current editor found a copy of the US book.

John met his publisher at CrimeFest – a great way to meet people! He’s with Bloodhound Books.

Will had three books published over five years ago. The first one did well but not the second and third. He took a break and then found Karen Sullivan at Orenda who was willing to take a risk.

Kevin had been with Hodder but was then dropped. He’s now with Amazon and his sales figures are very good.

Erin’s first book was The Poison Tree which was made into a TV series. She had three more books out but sales were slowing down so she took a break. She then wrote the Broadchurch novel. She found a new editor before writing He Said/She Said which is her first big seller. 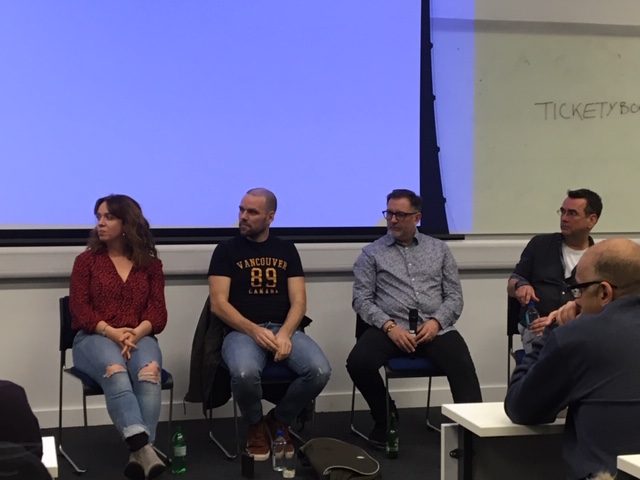 So what’s next for our authors?

Erin – Stone Mothers will be out next April. It’s based on a Victorian asylum. There’s a man and a woman and dead bodies.

Will is working on a few ideas. His agent has told him that one of them is completely bonkers so that’s probably the one he’ll go with.

John is finishing off the third in the Danny Felix series as well as writing a standalone set in Belfast about the hunger strikes.

Mick delivered a book just last week and is now having a bit of a break.

A question from the audience – what do you enjoy most about being a writer?

Will likes being on his own. No one else is there so he doesn’t have to have a pointless conversation about EastEnders while making his coffee.

For Erin, one life isn’t enough. As a writer she gets the chance to live several lives at no risk.

John finds that writing sometimes takes him by surprise. He ends up writing something different from planned.

Writing is very absorbing for Mick so he’s glad that he can do it full-time now.

The freedom of time is also important for Kevin.

There were a few more questions from the audience but my hand had given up by then with all my scrawling.

It was then time for a cookie break before moving onto the rest of the entertainment for the evening – Blind Book Date. 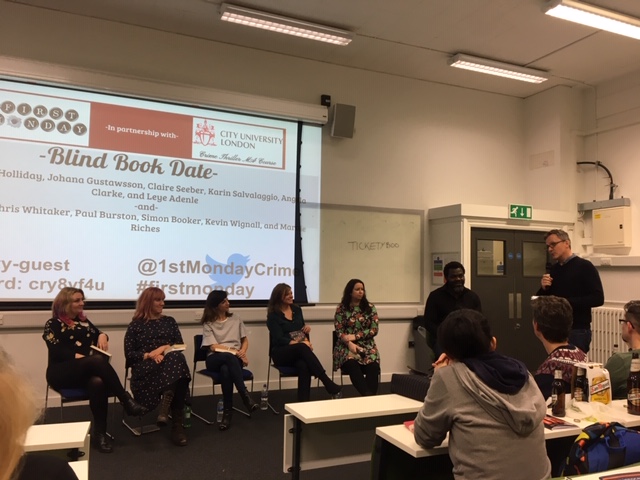 Leye Adenle was asking the questions to find his perfect book for Christmas. Trying to convince him to choose their books were Susi Holliday, Karin Salvalaggio, Johanna Gustawsson, Claire Sebber and Angela Clarke. Leye was looking for a strong female lead, as in, how many kgs could she lift? I think Johanna might have won that round with her female in Keeper lifting a dead male body. Next, Leye wanted to know what drink would go best with the book. For me, Susi nabbed that one with a Bailey’s Hot Chocolate to read with The Deaths of December. Leye’s final question was, what’s so gripping about the book that he’ll want to put down his drink. Karin had the clever plan of putting subliminal messages to drink into her story. She’s in talks with a few drinks companies. Of course, Leye couldn’t decide so he chose them all. 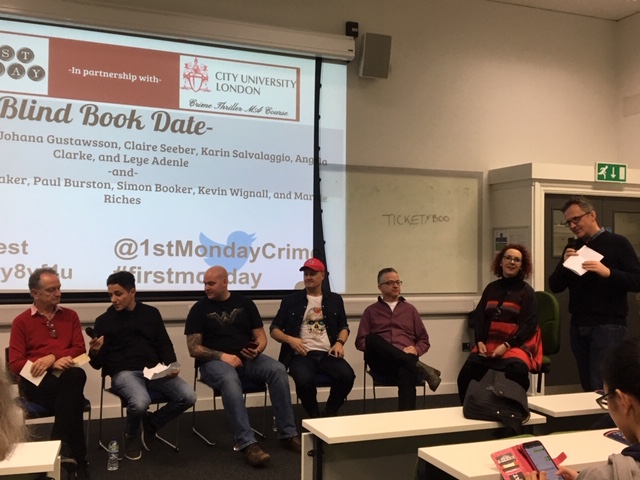 Next up were the men – Simon Booker, Chris Whitaker, James Law, Paul Burston and Kevin Wignall – who had to woo Marnie Riches. It takes a lot to woo Marnie and she certainly put them through their paces. First up, the men had to write a limerick about their books. I think it’s fair to say that some hadn’t quite understood the concept of a limerick being only five lines long. But they were all very funny with a couple of near misses (think about what rhymes with hunt) that were suddenly changed into other words. I would say that Simon had the best limerick but Chris has to be congratulated on his epic poem (definitely not a limerick). Next the guys had to tell an anecdote (true or false) about writing their novels. Personally I think James won this. He used to be a submariner in the Navy and when he was working on his first draft, he got a colleague to read it for authenticity. It might have been too authentic as James was called in to speak to the Royal Navy Police about whether or not he had breached the Official Secrets Act. Lastly, Marnie wanted to know where the authors would send their protagonists/ antagonists on holiday. Since Kevin’s character Freddie Makin is already in Vienna, he wondered where else he could go. Butlins on Barry Island perhaps. Sadly that shut over 20 years ago so maybe Freddie should stay in Vienna and go on the Big Wheel. Like Leye, Marnie couldn’t make a decision so thought she’d read them all over Christmas.

Now you go. That will keep you busy for a while!

The hilarity continued at the pub and the last of the cookies were consumed (hooray!). So that’s it for 2018 for First Monday. It’s been a great year full of fabulous authors. But we don’t have to wait too long for more. First Monday will return in January!

*By the way, does anybody know what #ticketyboo was all about?*