Looking for a gripping holiday read? Then look no further. The Chain is the ‘must-have’ book of 2019. Thank you to Tracy Fenton and Orion for inviting me to take part in the blog tour. Before I give my review, here’s the blurb.

A STRANGER HAS KIDNAPPED YOUR CHILD.

TO FREE THEM YOU MUST ABDUCT SOMEONE ELSE’S CHILD.

YOUR CHILD WILL BE RELEASED WHEN YOUR VICTIM’S PARENTS KIDNAP ANOTHER CHILD.

IF ANY OF THESE THINGS DON’T HAPPEN:
YOUR CHILD WILL BE KILLED.

YOU ARE NOW PART OF THE CHAIN 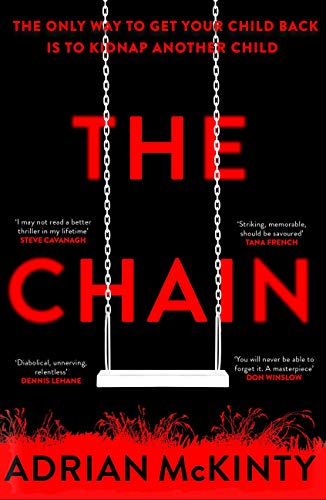 Well, where to begin? I’ve heard lots of people have read this book in a day but I couldn’t do that. My nerves wouldn’t let me! The tension is there from the very beginning and doesn’t let up until the last page. This really tapped into my fears as a mother and I had to keep reminding myself this book is fiction and not true crime.

Rachel, the main character and mother of Kylie, is beautifully written. As a divorced mum, recovering from breast cancer, she’s hugely believable. Her vulnerability is evident. I’d call her a ‘lioness’ mother. She appears calm until you hurt her baby. Then she comes out fighting. Definitely something I recognise in myself.

But this isn’t a book that only parents can relate to. Adrian McKinty cleverly brings Kylie’s Uncle Pete into the story. There aren’t many people who don’t have a nephew or a niece or a cousin or maybe a godchild. Or a neighbour’s child who you absolutely adore. The Chain puts a moral dilemma in front of us all and asks us to choose – your child’s life or keep the Chain moving.

By using multiple viewpoints, McKinty keeps us, the readers, on our toes. Sometimes we’re allowed to know things in advance. Other times we’re on the back foot. But never bored. Each chapter moves us along The Chain, getting closer to the true perpetrators.

With the atmospheric setting of Plum Island in the fog, this is a book crying out to be on a screen. Personally, my preference would be a TV series rather than a film. The plot would need to be slimmed down to fit into a couple of hours for a movie. I don’t think that should happen. This is a story that deserves to be told in its entirety*. And it’s such a fabulous story. I already have my book of the year for 2019 but The Chain has jumped into my top five if not top three. Believe the hype and read it.

* Since writing this review, Adrian McKinty has accepted a deal from Paramount to make a movie. I’d still prefer a TV series but I’m really happy for Adrian McKinty. He absolutely deserves this.

You can buy The Chain here.

Adrian McKinty was born and grew up in Belfast, Northern Ireland, during the troubles of the 1970s and 1980s. His father was a boilermaker and ship’s engineer and his mother a secretary. Adrian went to Oxford University on a full scholarship to study philosophy before emigrating to the United States to become a high school English teacher. His debut crime novel Dead I May Well Be was shortlisted for the CWA Dagger Award and was optioned by Universal Pictures. His books have won the Edgar Award, the Ned Kelly Award, the Anthony Award, the Barry Award and have been translated into over 20 languages. Adrian is a reviewer and critic for the Sydney Morning Herald, the Irish Times and the Guardian. He lives in New York City with his wife and two children.

I was a little bit behind the times when I read The Puppet Show earlier this year. Thankfully, thanks to NetGalley, I’m more on the ball this time round. Before my review, here’s the blurb.

After The Puppet Show, a new storm is coming . . .

Jared Keaton, chef to the stars. Charming. Charismatic. Psychopath . . . He’s currently serving a life sentence for the brutal murder of his daughter, Elizabeth. Her body was never found and Keaton was convicted largely on the testimony of Detective Sergeant Washington Poe.

So when a young woman staggers into a remote police station with irrefutable evidence that she is Elizabeth Keaton, Poe finds himself on the wrong end of an investigation, one that could cost him much more than his career.

Helped by the only person he trusts, the brilliant but socially awkward Tilly Bradshaw, Poe races to answer the only question that matters: how can someone be both dead and alive at the same time?

And then Elizabeth goes missing again – and all paths of investigation lead back to Poe.

The Puppet Show left me reeling. It was brilliant but brutal. The Immolation Man was a savage killer and an unknown quantity. This time round, Detective Sergeant Washington Poe knows who’s responsible. At least he thought so until evidence proves otherwise. How can a supposedly dead woman come back to life six years later?

There’s a lot less gore in this novel but the plot does not suffer in any way. In fact, I found Black Summer even more compelling. It’s a proper mystery that appears insolvable. Even Tilly Bradshaw, Poe’s analyst colleague, is scratching her head over this one. There are plenty of curve balls in this story and I genuinely could not work it out. I love I was kept guessing to the very end.

Although this could be read as a standalone, I think it helped that I had read The Puppet Show earlier this year. It meant I was comfortable with Poe and Bradshaw as characters. Tilly’s quirkiness is totally endearing and I love how she and Poe bring out the best in each other. They make for a mischievous pairing and DI Stephanie Flynn’s exasperation with them both is evident.

Although the Cumbrian countryside is a main feature again, Storm Wendy makes an appearance too. The weather is ominously hot for a Cumbrian summer and the storm is brewing. Mike Craven times it well. The storm hits as the s**t hits the fan for Poe, elevating the tension to fever pitch.

The other thing that really intrigues me about this book is the title. Does Black Summer refer to the sky during the storm or the content of the story? No. It’s a truffle. And absolutely key to everything. And that’s the only clue I’m going to give you. You’ll have to read the book for yourself to find out the rest.

You can buy Black Summer by clicking here. 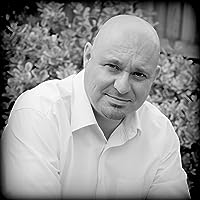 M.W. Craven was born in Carlisle but grew up in Newcastle, running away to join the army at the tender age of sixteen. He spent the next ten years travelling the world having fun, leaving in 1995 to complete a degree in social work with specialisms in criminology and substance abuse. Thirty-one years after leaving Cumbria, he returned to take up a probation officer position in Whitehaven, eventually working his way up to chief officer grade. Sixteen years later he took the plunge, accepted redundancy and became a full-time author. He now has entirely different motivations for trying to get inside the minds of criminals…

The Puppet Show, the first in a two-book deal he signed with the Little, Brown imprint, Constable in 2017, was released to critical acclaim in hardback in 2018. It has been sold in numerous foreign territories and the production company Studio Lambert, creators of the award-winning Three Girls, have optioned it for TV. The sequel, Black Summer, follows in June 2019.

M. W. Craven is married and lives in Carlisle with his wife, Joanne. When he isn’t out with his springer spaniel, or talking nonsense in the pub, he can be found at punk gigs and writing festivals up and down the country.

Nearly three years ago I read Sam Carrington’s debut Saving Sophie. I can’t believe that The Missing Wife is her fourth novel! That’s pretty impressive. I’d like to thank Sabah Khan at Avon for inviting me to take part in the blog tour. And Sam is so popular, she’s got lots of bloggers on her tour ready to shout out about The Missing Wife.

You think you know those closest to you. You are wrong…
A sleep-deprived new mother approaching her fortieth birthday, the very last thing Louisa wants to do is celebrate.

But when her friend Tiff organises a surprise party, inviting the entire list of Louisa’s Facebook friends, Louisa is faced with a room full of people she hasn’t spoken to in years – including someone she never expected to see again: her ex-boyfriend, Oliver Dunmore.

When Oliver’s wife Melissa goes missing after the party, everyone remembers the night differently. Someone knows what happened to Melissa, and Louisa is determined to find them. But the truth could be closer, and the deception more devastating, than she’d ever imagined…

There’s so much I can relate to with Louisa. I had my third child in my late 30s and the sleep deprivation was unbelievable. I too had to write down feed times to keep an eye on them although my son was quite effective at letting me know when he was hungry! I can drive but I was afraid of doing so because I didn’t feel safe – I was that tired. So I also walked when I had to but mostly I stayed home with a screaming, puking baby. It was hell. So I connected with Louisa pretty quickly.

By setting The Missing Wife in a small village in Devon, the sense of being isolated and trapped is intensified. Apart from her husband and teenage daughter, Louisa only has one real friend – Tiff. But Tiff puts that friendship in jeopardy when she throws a surprise 40th birthday party for Louisa and includes an ex-boyfriend on the invite list. Has any good come from inviting exes to parties or any other events?

Right from the start it’s clear that something’s not quite right about Oliver. Louisa has enough problems with her mind playing tricks on her with the sleep deprivation. But Oliver’s reappearance has triggered old, buried memories. Sam Carrington skilfully takes us through Louisa’s growing paranoia until Louisa can’t trust anyone – not even herself.

One thing I did miss with this book is the police. Sam Carrington has a couple of wonderful detectives called DI Lindsey Wade and DS Mack who have appeared in her previous novels. Although they feature very briefly, I would have loved to have seen their take on the case of ‘the missing wife’. By keeping it to one point of view, the book is gloriously claustrophobic but I missed Lindsey’s very down-to-earth and direct approach.

Ultimately, I think this book is about trust. Not just who you can trust but whether you can trust yourself. Our memories of past events are often our own interpretation of what’s happened rather than a real factual account. So with more secrets and devious behaviour than a Cabinet Minister, can anyone be relied upon in The Missing Wife? You’ll have to read it to find out. A first rate psychological thriller.

You can find out more about Sam Carrington and buy her books here.

Sam Carrington lives in Devon with her husband, two border terriers and a cat. She has three adult children and a new grandson! She worked for the NHS for fifteen years, during which time she qualified as a nurse. Following the completion of a Psychology degree she went to work for the prison service as an Offending Behaviour Programme Facilitator. Her experiences within this field inspired her writing. She left the service to spend time with her family and to follow her dream of being a novelist. Saving Sophie, her debut psychological thriller, published in September 2016. It became a Kindle eBook bestseller, with the paperback hitting The Bookseller Heatseeker chart at #8. Sam was named an Amazon Rising Star of 2016. Her second psychological thriller, Bad Sister, published in 2017 followed by One Little Lie in July 2018. The Missing Wife publishes in June 2019 with her fifth due on 12th December.